Tax Expenditures in the Balkans: Time to Open the Black Box

The traditional way of thinking about government expenditure goes as follows: first, governments collect revenue (through taxes, borrowing, or other means such as fines and penalties) and then they spend that revenue through the budget process. However, governments can also choose to support different economic sectors, activities, or groups of taxpayers through preferential tax treatment, e.g., through exemptions, deductions, tax credits, and reduced tax rates, and other forms of "tax expenditures" (TEs).

Unlike direct spending, the use of TEs is widely overlooked. In general, most direct spending programs must go through the budget process and are subject to public scrutiny. On the other hand, spending through TEs can easily stay under the radar.

For the past two years, I have been part of the team building and launching the Global Tax Expenditures Database (GTED). The GTED is the first global database bringing together information on the design of TEs and the losses in tax revenue resulting from them for all reporting countries. While building the GTED, we confirmed the striking lack of transparency in the TE field. More than half the countries worldwide (118 out of 218) have never reported on TEs throughout the 1990-2020 period covered by the GTED. A similar picture emerges in the Balkans, where only 6 (Albania, Bulgaria, Greece, Romania, Slovenia, and Turkey) out of 13 countries have provided some type of TE data. 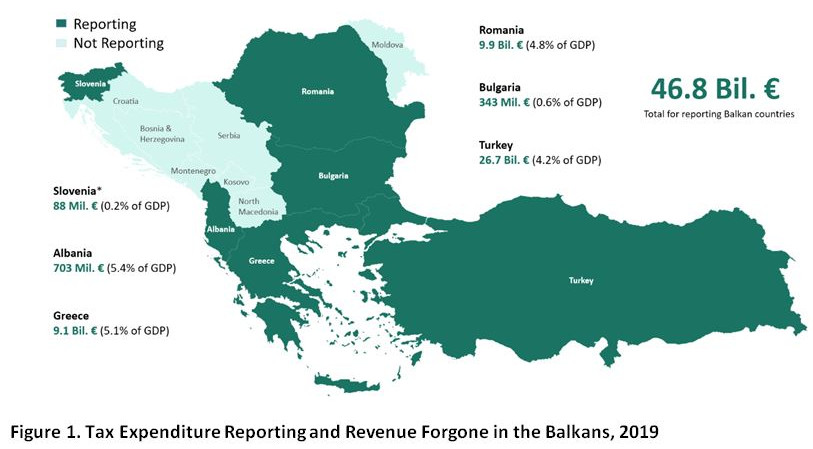 This opacity is even more worrisome since the fiscal cost of TEs is significant. The global average revenue forgone on TEs lies around 4% of GDP and 23% of collected tax revenue. According to the GTED, the Balkans show a similar picture. In 2019, the average TE/GDP and TE/Tax Revenue ratios across the six reporting countries were 4% and 22%, respectively. Yearly TEs amount to just over €9 billion in Greece, close to €10 billion in Romania, and can be as high as €27 billion in Turkey.

Indeed, these figures should be taken as lower bound estimates. First, the levels of revenue forgone are unknown for non-reporting countries such as Bosnia and Herzegovina, Croatia, Kosovo, Moldova, Montenegro, North Macedonia, and Serbia. Moreover, even for reporting countries, limited coverage is very likely to lead to underestimating the real magnitude of TEs. For example, the Slovenian TE report only covers investment-related TEs. The Greek TE report only provides figures on revenue forgone for a small fraction (17%) of over 800 TE provisions listed.

Falling Short of Stated Goals and Triggering Side Effects

Moreover, besides the lack of transparency and their fiscal cost, the use of TEs is often controversial since they frequently fall short of reaching their stated goals and can trigger significant side effects. In some cases, even the stated goals themselves are subject to debate. TEs supporting the production and use of fossil fuels – €50 million in Bulgaria, €220 million in Greece and €3 billion in Turkey in 2019 – are a case in point. TEs in Albania through the exemption from value added tax (VAT) for members of the Albanian parliament provide further illustration.

TEs are also problematic in the context of domestic revenue mobilization (DRM) since they reduce much needed tax revenue. The need to increase DRM across Balkan countries is a long-standing issue. The current economic shock triggered by the COVID-19 pandemic has exacerbated the need for mobilizing domestic resources in general, and tax revenue in particular. As shown in Figure 2, government revenue-to-GDP ratios of most non-EU Balkan countries lie below the EU average, which considerably affects fiscal space. Moreover, these countries mostly rely on taxation as the main source of revenue. Thus, reforming TE systems is a vital step towards boosting DRM. 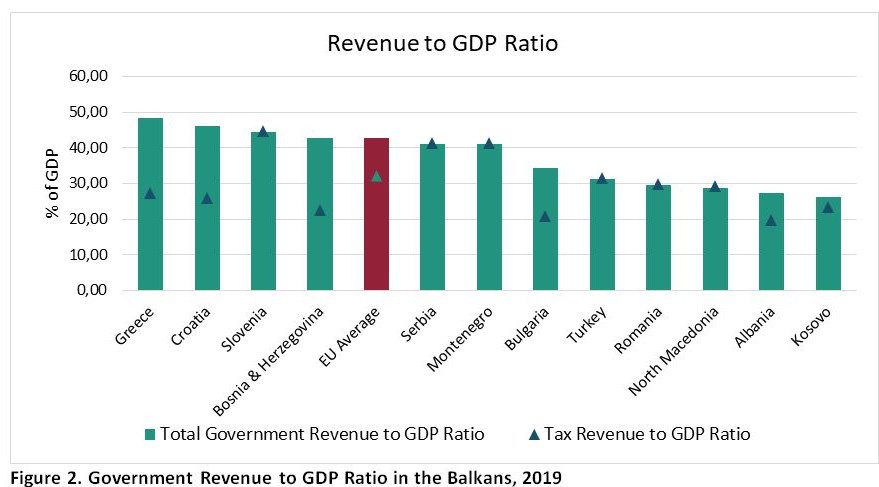 As in many countries worldwide, an important part of the COVID-19 response in the Balkans included the implementation of new TEs and other tax-related measures. For example, several countries granted deferrals for tax declarations and tax payments. Some countries also introduced temporary tax exemptions, rate reductions, or tax refunds for specific goods, industries, or population groups.

My home country, Kosovo, for instance, implemented a temporary customs duty exemption for the import of wheat for bread production. Slovenia introduced personal income tax (PIT) and corporate income tax (CIT) exemptions for private donations and implemented a PIT exemption for income earned from abroad. Both Serbia and Montenegro, also granted VAT exemptions for certain donations of goods to public institutions. Montenegro reduced its VAT rate for several tourism-related services from 21% to 7%.

Similarly, Turkey provided a wide range of VAT reductions for tourism and entertainment-related venues such as cinemas, coffee shops, hotels, restaurants, as well as other types of businesses such as barber shops, tailoring, dry cleaning, motor vehicle repair shops, locksmith services, etc. The country also lowered its withholding tax rate on rent payments and the VAT rate on education services. Greece implemented a whole fleet of TE measures including a 25% deduction on certain VAT payments, VAT exemptions on donations of certain goods, and reduced VAT rates for hygiene products.

Even though most of these TEs are designed as temporary measures to fight the COVID-19 pandemic, they may remain in place afterwards. In general, once introduced, TEs tend to be sticky and hard to remove. For example, an income tax reduction for rental investments (“Réduction d'impôt sur le revenu en faveur de l'investissement locatif”) that was introduced in France in 2008 as a temporary measure to tackle the financial crisis is still active. In 2019, this provision alone resulted in €690 million in forgone tax revenue for the French government.

Against this background, three steps are critical to drive tax expenditure reform: First, improving transparency on existing TEs and the forgone tax revenue resulting from them. Second, evaluating existing TEs and reforming those that are not aligned with government priorities or are ineffective in targeting them. And third, assessing the likely impacts, including potential side effects, of new TEs before adopting them as well as ensuring that such new TEs include sunset clauses, i.e., legal clauses stating that a provision will automatically cease to have effect after a specific date. The COVID-19 pandemic has exacerbated the necessity for mobilizing domestic revenues in the Balkans. Governments in the region cannot afford to keep losing tax revenue on ineffective TEs. Opening the TEs black box is a critical first step in that direction. Driving TE reforms must follow – not only to weather the COVID-19 storm, but also as a key pillar for inclusive and sustainable economic growth in the region.

Flurim Aliu Flurim Aliu is a Research Analyst with Council on Economic Policies (CEP) where he focuses on fiscal policy. He is co-leading the Global Tax Expenditures Database (GTED) project, a joint initiative between the CEP and the German Development Institute. He previously worked at the World Bank, where he contributed to policy research at the Infrastructure Chief Economist’s office. Flurim holds an MA in International Commerce from Seoul National University in Korea and a BA in Political Science from Georgia Gwinnett College in the United States.