Impro-Drama Play – Making of a Scenario

I’ve worked as an expert with the CEF on many learning initiatives in the past years and I would like to give credit to their teams for constantly striving to improve the way we, experts, work with the training participants during the learning process. The leading moto of CEF workshops is to engage people to the maximum extent possible because by involving them in the learning process, you increase the percentage of the things they remember. Even more importantly, you substantially influence participants’ understanding and comprehension of the topic.

At the beginning of 2020, the CEF engaged me as an expert in the workshop on Managing Financing and Costing of Pension System Reforms. We tried to develop and introduce a new learning format, which they now call impro-drama play. It is about teaching each player how to connect the topic of the game (the so-called technical knowledge) with the complexity of interpersonal relationships (the so-called soft skills), which are extremely important when enforcing new ideas in institutions and beyond. My role, together with another CEF expert, Saša Jazbec, was to write a scenario for the play, and Negotiating a set of pension system reforms seemed to be the best topic.

Basically, we placed all participants in one country, which was negotiating a new stand-by agreement with the IMF, including a beneficial loan to the national budget. Based on the scenario, the IMF had made it clear that they would not agree to a new stand-by agreement, unless a pension reform was approved by the parliament. Participants were divided into five groups, presenting the most important stakeholders in enforcing a pension reform: the government, trade unions, business associations, members of parliament, and the public.

The scenario included two formal negotiation rounds, staged as meetings of the Social and Economic Council and the Parliamentary Committee. The meetings were conducted by game facilitators to make them more realistic and to ensure that they would proceed dynamically. Time was also provided for informal negotiations – including during a coffee break – to try to strike some deals that could not be made in formal meetings. Groups also used this time to rethink and adjust their strategies.

Another driver of the game were recurrent interventions by the group representing the public. They expressed their views by taking several polls about which group had convinced them the most, and whether they supported the reform or not. But probably the highlight for everyone was the TV show, including all stakeholders, taking place in a staged TV studio and hosted by a real – and very provocative – talk show host Aljuš Pertinač.

Each stakeholder group had their own interests, motivation and political objectives. These were announced and explained in the first day of the workshop, giving participants enough time to prepare and think while listening to the lectures and the roundtable on pension reforms. The most difficult part in designing the game set-up was to provide incentives for different groups to actually negotiate with each other. Why, for example, wouldn't trade unions simply declare that they oppose the reform and walk away from the negotiations? Or, why wouldn't the government simply pass the reform through the parliament, regardless of the objections of any social group or the opposition? 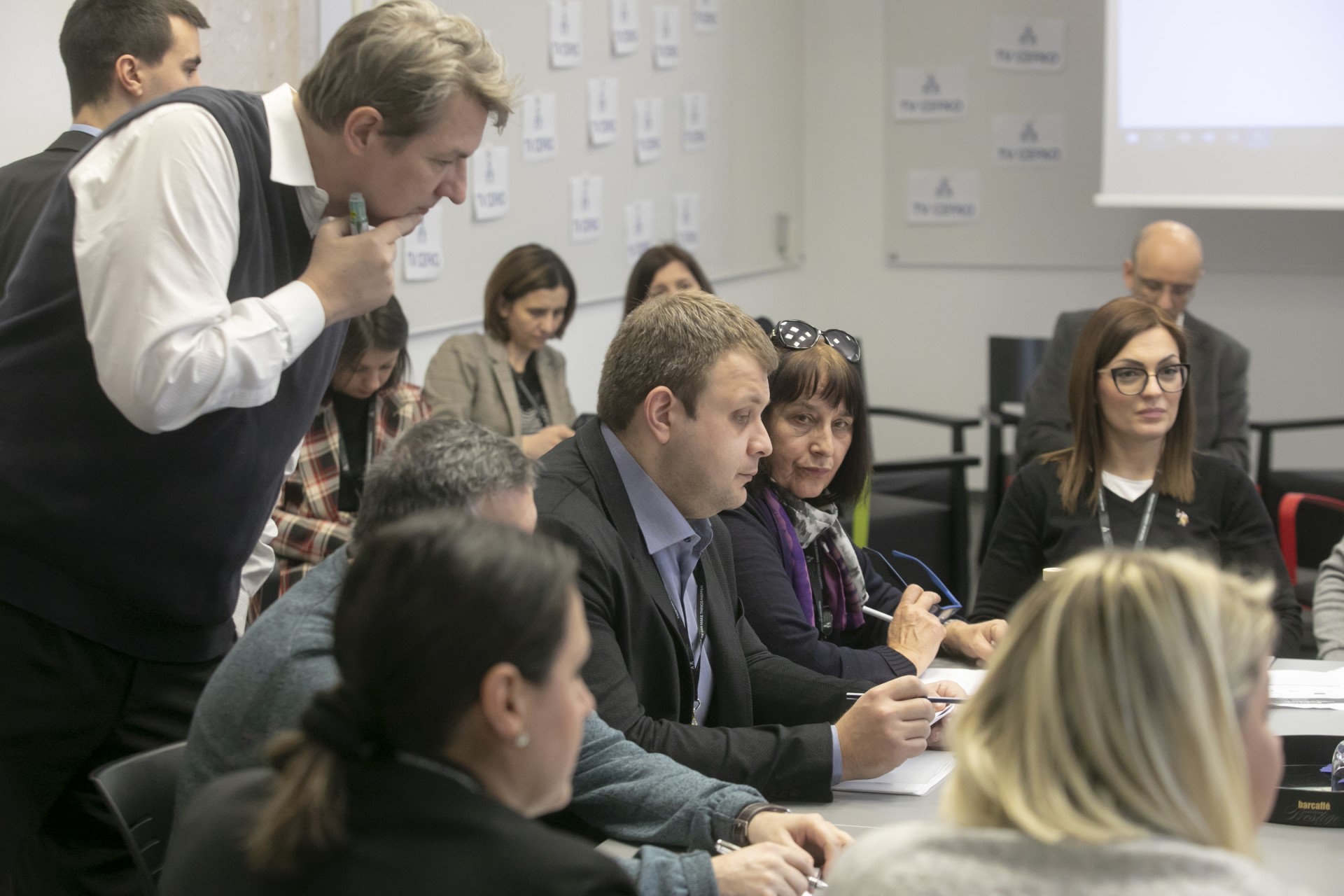 We did this by designing a specific set of objectives and constraints for each group. The groups' objectives were about what they needed to try to achieve through the negotiations. Constraints were twofold. On one hand, they were about the cost, or risk, that they would face if they simply refused to negotiate. On the other hand, we tried to limit how far they could go in accepting or refusing proposals from other groups. In developing the objectives and constraints, we drew very much on the insights of modern political economy, rather than traditional normative ideals of politicians and stakeholders seeking the greater social good.

The government's objective was, of course, to pass the reform. To force them to negotiate, we designed it as a minority government, which meant that they needed support from at least one opposition party to pass the reform. We also hinted that mustering support from social partners would increase the likelihood of getting enough votes in the parliament. Another objective for the government was to keep a reasonable level of popularity with voters. So, they had to invest efforts into presenting the reform as necessary and fair.

However, these objectives could lead the government to completely water down the reform proposal just to get support from everyone and keep their popularity levels high. To prevent that, we introduced a financial constraint: a requirement that the reform must achieve a certain level of savings – not as much as the original proposal would, but not much less either – or else the IMF would not extend the current stand-by arrangement and loan. The government was therefore handed a specification of how much deviating from the original proposal would cost in terms of foregone savings.

The objective of social partners was to promote the interests of the social group they represented, and to negotiate on changing the elements of the reform that they found most detrimental for their members. To prevent them from simply leaving the negotiations, we told them that the government could be able to pass the reform in the parliament even without their approval – so offering their support in exchange for some changes to the original proposal looked like a superior strategy to completely rejecting the reform. We also told them that they had to preserve their credibility in their own social group, so they needed something tangible from the negotiations to be able to explain to their members what they had achieved in exchange for potentially agreeing to the reform.

A similar mixture of objectives and constraints was developed also for parliamentarians. They needed to express the interests of their voters and act true to their official political ideology. In order to prevent them from just blocking the reform without negotiations, we told them that not passing the reform could result in early elections, or, in other words, them losing their current well-paid jobs.

This mixture of objectives and constraints may look complicated at first sight, but it worked well in practice. This was greatly helped by CEF facilitators, Nina Agić and Tara Vasiljevič, who developed the initial scenario into a game that could work in the classroom and also created a very real-life environment for the game. Participants had no real trouble in understanding and acting upon them. Obviously, politics work the same everywhere, and we all know it. We gathered some feedback from participants about where they saw added value of the game from their perspective. You can read about it here.

Having said all this, participants still surprised us with how much they were engaged in the game and how much they were able to accommodate to some unforeseen events. But that is also how real life works. It never goes fully according to the scenario, and neither should the game.

Janez Šušteršič is a senior economic expert with more than 10 years hands-on experience in formulating and implementing economic and fiscal policies. At the CEF he is as affiliated expert supporting development and implementation of the Data and Analysis for Designing Policies thematic area. He led the Slovenian government's macroeconomic institute (IMAD) from 2000 to 2007. He was Vice-President of the ECOFIN's Economic Policy Committee and, in 2012, finance minister of Slovenia designing the policy of fiscal consolidation and banking crisis resolution. Today he is a partner in a private firm RE-FORMA, d.o.o., and a full professor of economic policy. Since 2013 he worked as an international consultant for the OECD and on a number of technical assistance projects.