Public investments are important drivers for economic growth, yet they are the first to be cut during periods of fiscal constraints. In many countries this has exacerbated project delays and cost overruns, has often led to arrears, and stalled unfinished projects. Whether a country’s portfolio of public investments delivers the anticipated benefits depends crucially on how well it is managed. This workshop examined the key stages of the public investment cycle to identify the critical areas where the efficiency and effectiveness of public investment could and public private partnerships be improved. It continued a sequence of related CEF learning initiatives delivered in cooperation with IMF FAD experts.

How you have benefited?

This workshop aimed at helping public officials better understand key factors undermining the efficiency of public investment spending, as well as shortcomings in procedures and institutional organization, in order to explain what improvements can be made to ensure better management of public investments.

Upon completion, participants were able to:

What you have learned?

The workshop outlined the desired features of effective public investment management systems, and highlighted gaps between how systems are meant to work on paper and how they often work in practice. It provided a concrete and pragmatic set of recommendations for how ministries of finance can improve the ways that governments manage investment expenditure, i.e. how they prepare, evaluate, prioritize and monitor their capital projects.

The event provided insight into the key stages of public investment cycle set in the IMF's PIMA – planning, allocation and implementation – to identify the critical areas where efficiency and effectiveness of public investment could be improved to disable project owners to systematically overestimate the benefits and underestimate the costs of a project in their appraisals.

Furthermore, it explained how the distinctive challenges of managing investments seek identification of specific institutional arrangements necessary to support these stages and enable adequate outcomes. Finally, it examined the position and role of an independent review of appraisal results, and assessed how it could be used as a way to check compliance with procedures, and to restrain political influence over project selection.

We took a look at public investment plans as a means of linking a portfolio of investment projects with a long-term national development objectives, and analyzed the role of these planning documents in creating a pipeline of well-prepared projects, appraised using cost–benefit analysis, and made ready for selection in the annual budgeting process.

Moreover, we assessed how the stages in the life cycle of a public investment project can be combined with the annual budget cycle at certain key moments. Taking the prospective of a finance ministry, we assessed how this system, constructed to effectively inform annual budget formulation, can secure better debt management, reduction of arrears, and compliance with overall medium-term fiscal objectives.

Since PPPs are becoming an increasingly popular mechanism for funding public investments, this learning initiative also discussed how management of capital projects with external financing can be better integrated within overall public investment management systems to secure value for money.

The event was held in English, and it as highly participatory. Participants were encouraged to share their experiences and country practices.

Invited were public officials in South East Europe who are working at ministries of finance, capital intensive line ministries, central planning and coordinating institutions, and government agencies for roads and railways, and who are actively participating in planning, appraisal, evaluation, implementation and oversight of capital projects.

No fee will was charged, and meals and refreshments were provided during the event. Flights, transfers, and accommodation were funded for up to three officials per EU 2014-2020 Instrument for Pre-Accession (IPA II) beneficiary country, as well as one official per country from Armenia, Bulgaria, Croatia, Georgia, Moldova, Romania, and Ukraine. Applications of additional self-funded candidates from the CEF Constituency (and beyond) were considered, as far as space permitted.

Ms. Flynn works for the IMF and has been based at the CEF since October 2016. She is technical advisor for public financial management in South East Europe. At the CEF, Ms. Flynn helps deliver learning programs related to her work. She joined the IMF five years ago after six years working in East Africa with PwC and in the Ugandan treasury. She started her career in the UK public service in 1987, starting in central government, and qualifying as a CIPFA accountant in local government in 1991. Before embarking on her career in Africa, she spent 3 years working for CIPFA in London. She has also worked in a number of Asian and Central Asian countries, and worked with several governments in South East Europe.

Mr. Last was the IMF PFM Advisor for South East Europe until October 2016, having previously been based in IMF headquarters for the last 8 years. Prior to that he had been working in the field for 20 years covering various topics in public financial management, including: PFM advisor in the IMF's AFRITAC East Regional Technical Assistance Center; budget and treasury advisor in Slovenia also covering various countries in the region, during which time he helped establish the Center of Excellence in Finance; budget and IFMIS advisor in Mali and Papua New Guinea, debt management advisor in Papua New Guinea, and debt management software designer at the Commonwealth Secretariat in UK.

Stine Andersen - Head of the Secretariat for the Western Balkans Investment Framework, DG NEAR

Ms. Andresen, an economist from the University of Oslo, Norway, has more than 30 years of professional experience in international project finance including 12 years in the World Bank Group (MIGA) and 12 years managing EEA and Norway grants (the EEA EFTA states cohesion funds for EC members states). She joined the European Commission as Head of the WBIF (Western Balkans Investment Framework) Secretariat in January 2016.

Mr. Pogačar has more than 15 years of professional experience in PFM area with expertise in budget preparation, budget execution, medium-term budgetary framework, program budgeting, project/capital budgeting, fiscal reporting, and financial management information systems, and debt management. This includes also various evaluations in the area of public finance. Mr. Pogačar spent greatest part of his career in the Ministry of Finance in Republic of Slovenia, working under various roles, as the Head of the unit responsible for development of the budget system, Director of Budget Department, General Director of Budget Directorate and State Secretary. In past years he has been working for the IMF, WB, UNDP, and EC on providing assistance to countries from Central and Eastern Europe, South America and Asia in implementing PFM reforms.

Edgardo Mimica - Professor of Project Appraisal at the University of Adolfo Ibáñez, Chile ​

Mr. Mimica holds a Ph.D. (c) in Public Policy University of Birmingham, U.K., Master in Public Policy at Harvard University, and MBA-Executive at Adolfo Ibáñez University, Civil Engineer at the University of Chile. He is working as international consultant in project management, evaluation and risk analysis with more than twenty years of professional experience. He has extensive academic experience in strategic management and evaluation of business projects, since he has been working as Professor at Universidad Adolfo Ibáñez. In his professional career, he has held various executive positions such as the Board of Directors of Quiñenco Holding, the Executive Secretary of the Association of Supervisors of Banking in the Americas (ASBA), the Rector of the Universidad Católica del Norte, the Advisor to the Minister of Finance, the Chief of Cabinet Minister of Mideplan, Director of Fulbright Chile Commission.

Mr. Nouwt has been for many years part of the Dutch Ministry of Finance working on improvement of financial management functions of line ministries, and introduction of accrual accounting system. Between 2001 and 2009 he was a project director for the PPP renovation of the Ministry of Finance in The Hague, representing the first long-term cooperation between a private party and the State. Afterwards he was a project director for the new accommodation for the National Institute for Public Health and the Environment and the Medicines Evaluation Board. Mr. Nouwt also lead 'Together Housing of the Ministry of Social Affairs and Employment and the Ministry of Health, Welfare and Sport' project aimed at reducing costs of central government's housing in the Netherlands. From 2006 to 2013 he combined his jobs in the Netherlands with the function of a project leader to improve the public internal financial control system in the Republic of Macedonia.

This learning initiative was supported by:

Tara leads the design and delivery of the CEF PFM program aimed at strengthening Budget Preparation and Execution. She designs, coordinates, facilitates, and evaluates learning in that thematic area.

Ivana is a member of CEF’s Event Management Team and is responsible for support to the Program Team in implementation of programs, projects, and other activities. 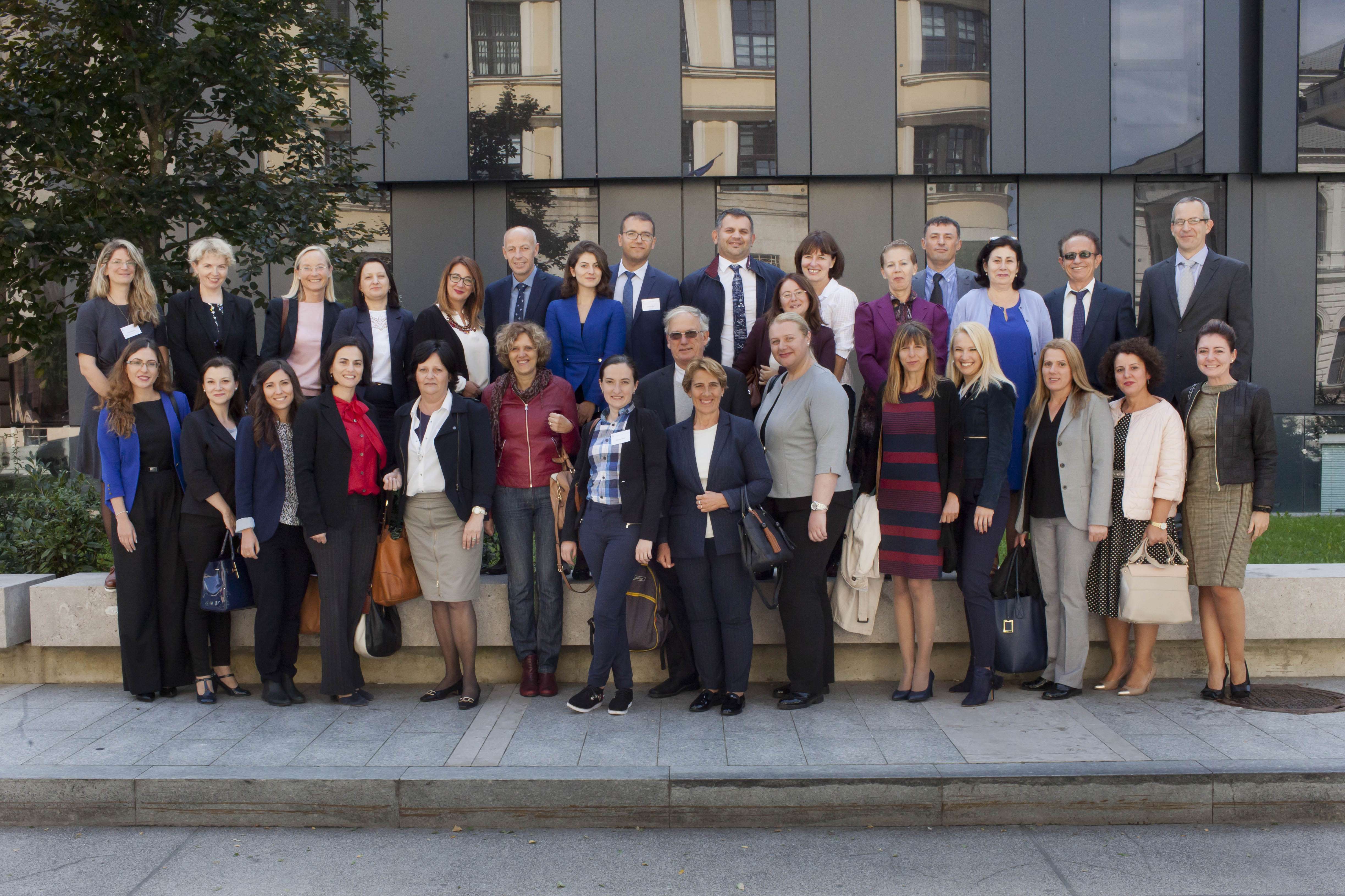