Mr. Andrija Aleksoski, national Economic Reform Programme (ERP) coordinator for North Macedonia, shares his thoughts and experiences of his attendance at the learning and knowledge sharing events. All events were delivered as part of the EU funded “Strengthening Line Ministries’ Capacities to Assess Fiscal Implications of Structural Reforms” (FISR) project.

“Since 2015, all candidate countries and potential candidates submit annual ERP to the European Commission. A strong link between the macroeconomic and fiscal scenario with the structural reform agenda is essential to achieve the comprehensiveness, coherence, effectiveness and credibility of the programme. Ensuring competitiveness and inclusive growth is the overall objective of the structural reforms included in the ERP.

In the previous six editions, the quality of the ERP has been increasing gradually. At the beginning, the priority was to establish a functional and effective ERP working group. Firstly, we appointed a national ERP coordinator from the Ministry of Finance, who steers the process within the Government and ensures a widespread consensus. In addition, ERP coordinators were appointed in each relevant line ministry to steer the process internally. Together they form an ERP working group that ensures broad ownership of the exercise.
Last three years, the focus was on preparation of a high-quality ERP that would not only be completely in line with the ERP Guidance Note, but also a document with strategic relevance that could be read and used easily by the experts and the general public.

We have achieved to set up an experienced working group that drafts a solid document. But our ambitions don’t stop here. We have a new goal: this powerful tool that we have created should be used not only to boost economic growth and competitiveness, but also strategically to support priority investments that can benefit from the Economic and Investment Plan for the Western Balkan countries, and to steer the IPA programming towards funding the implementation of the most relevant structural reform measures.
We realized that in order to step up this new level, we need to include ministers and other high-level officials more deeply in the process. I am thankful to the current minister of finance and the European Commission officials who accepted this idea and, with a lot of joint personal efforts, made it a reality.

The minister of finance elaborated this proposal to the Government, which accepted it. It was decided to organize two high-level meetings a year, first during the ERP assessment mission and second after the ministerial dialogue and adoption of joint conclusions.

During the last ERP assessment mission on 23 February 2021, the European Commission convened a high-level meeting to discuss with the ministers our key macroeconomic and structural challenges, and to outline a possible set of new policy guidance supporting a sustainable recovery from the COVID-19 crisis. Nine ministers, led by minister of finance Mr. Besimi, held a strategic discussion with the director for strategy at DG NEAR Ms. Myriam Ferran, the director for labor mobility at DG EMPL Mr. Jordi Curell Gotor, the representative from the DG ECFIN Mr. Andras Tari, and the EU ambassador Mr. David Geer. The meeting was a real success – a true dialogue about policy challenges and priorities that helped to prepare this year’s Economic and Financial Dialogue for North Macedonia.

The greatest reward and satisfaction for me and my team – Ms. Cvetanova and Ms. Velkova – was when Ms. Ferran emphasized that the European Commission is grateful for our personal commitment and great success in the multi-year organization of ERP preparation in North Macedonia. Organizing this high-level meeting was the latest achievement after many others during the ERP preparation process.

I would also like to point out that the FISR project helped us a lot in the preparation and realization of this meeting. We used many skills that we have gained with the FISR trainings, like online facilitation and smooth communication and coordination with high-level participants.

I would like to thank the CEF team for their FISR learning and knowledge sharing activities in the past two years that have improved our capacities for streamlining the ERP coordination process, better identification of structural challenges and easier, smoother drafting of reform measures, which has ultimately increased the quality of the Economic Reform Programme of North Macedonia.” 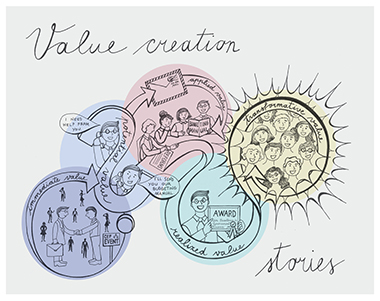 We collect value-creation stories to better understand the impact of our activities on the work of individual participants, as well as their organizations. According to the Wenger-Trayner conceptual framework, a change in behavior traverses different cycles, providing an account of how learning initiatives have created value for participants, their organizations, and stakeholders. Tell me more →